Books & Technology Reviews/ Insights Entertainment Buzz
August 15, 2015August 19, 2016 Buzzingtales 0 Comments Buzzingtales, Culture, Happy Independence Day, India, Patriotism, Society
Come Independence Day and the morning begins with a ring, bell, drum and trumpet of patriotism. You get up to the sound of songs on patriotism, news channels telecasting the speeches by leaders, features about famous people ( read entertainers) born on the same day, like the actress Rakhee . The tricolor is hoisted, national anthem is sung, guilt suddenly invades parents who then try injecting the nuances of nationalism into their children. Young enthusiasts sport tricolor bangles, Indian attires and innocent toothy faces painted with saffron, white and green. Everyone relishes a holiday, yet parents feel coerced to wake sleepy kids unceremoniously from their rare morning siesta to loud proclamations or patriotic songs on radio and mobile. In
the age of social networking, when your all your friends status scream “HAPPY INDEPENDENCE” one feels obliged to do the same, there is after all something called networking etiquette..Duhh!
You see elation (or is it so) circulating the net about getting to hear our Prime Minister speak for a full 90 minutes !!!  Most still recovering from the sad fact India missed another chance at grabbing a Olympic medal by a few seconds. Some try to douse the reality with a dash of satire with messages of “Happy Independence—sorry if you are married”. But I am sure there are many skeptics among us, the more serious ones who find it hard to go past the reality, especially when reality is such an abstract intimidating force for an individual to contend. We are plagued by the evils that percolate, and hold our society hostage. Where and what is the Independence we wonder and why are we celebrating? What have we actually achieved in these 70 years of Independence? 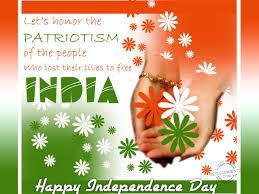 Then there are some who don’t celebrate or repent or even complain; for them life is forever a journey, a fight to make the future better than the present. These people work relentlessly, perform their duty with honesty and dedication; consider each day of their independent life an eternal struggle, where they work to make the rightful cause victorious. Be it Durga Shakti Nagpal, Anna Haare, Narayanan Krishnan (A chef who dedicated himself to feeding the poor living on the street), or Subhashini Mistry (who built a hospital with the money raised by selling vegetables) – they do not just complain or question they go those extra steps to put Mahatma’s saying into practice (Be the change you want to see). Why do we indulge in self-deprecation, (I am guilty of the same), isn’t it time-consuming and futile? Self –introspection followed by realization and then action to annihilate the deficiencies is more productive. Why do we dream of the lotus   without putting our hands in the mud? Do we inherit all the goodness of democracy just because the freedom fighters emerged victorious in their struggle against The British rule? Sustaining democracy is an even greater struggle. There are still many battles to be fought and Independence Day celebrates the victory of one such battle. Yes we do need to celebrate it, so that we are reminded of the extraordinary
struggle for even the ordinary causes i.e. Right to live free. We need to celebrate it to remind us from time to time that freedom doesn’t come cheap; that the price to uphold the nuances of freedom is heavy and has to be paid each day in both internal and external battles. So Happy Independence Day ….and Happy struggle ….the beginning.